I am: A S. Jersey girl who works for a Philadelphia non-profit arts/cultural organization.
Years in Philly: 50+ in area

END_OF_DOCUMENT_TOKEN_TO_BE_REPLACED

Posted on April 15, 2013 by Emma Fried-Cassorla in Art Museum Leave a comment 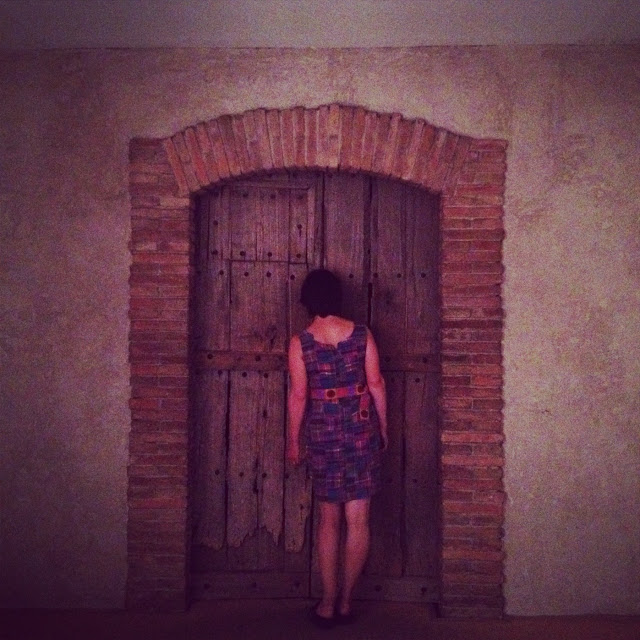 My love note: Probably what I love about this piece is its hidden badassery. Duchamp, obviously was a complete badass, and he gave up the art world (somehow convincing everyone he had devoted his life to chess), to work on Étant donnés. He worked on it in semi-secret, maintaining the chess charade, for decades, (1946-66), and it wasn’t unveiled until after his death.

So it is a secret piece and he made it for itself, and never had to confront a critical reception to it, though he did make it to be on display at the PMA. And obviously, looking at it — you realize that it’s the work of someone completely obsessed. There is something weirdly tangible about that kind of stalkery intense love produced in making something while obsessed by it and this piece, which I just called ” fucking-crazy-secret-naked-dead-waterfall” when I first saw it — well Étant donnés totally has it.

I stumbled on it in 2005. I knew about it, but somehow didn’t realize it was at the PMA till my mom (my mom! of all people!) took me into this secret back room in the Duchamp section (thanks to Anne d’Harnoncourt the museum has one of the best Duchamp collections in the world) and pointed me to this mysterious door with strange peepholes…and…well, just total weirdness. One person at a time has to peep through the door, and of course you are instantly trapped in this bonkers voyeuristic scene. Okay, so there’s the mysterious Laura Palmer-y nude (there is a rip near her belly btw, check it out, poor thing), but the whole tableau is so weirdly composed and unbent at the same time: the landscape, the perfect, glitttery waterfall, the upraised lantern. It’s so still, but it just seems like it’s going to degenerate into chaos at any minute. The whole scene is full of untold stories. I don’t know what to say. It’s strange and brilliant, and secret, and it was made for here. This thing is a fucking treasure! I love you, Étant donnés.
p.s. the world should know that the PMA’s upcoming Dancing Around the Bride, celebrating Duchamp’s influence on John Cage, Merce Cunnungham, Jasper Johns and Robert Rauchenberg is going to be pretty great. It opens October 30th.
Posted on September 5, 2012 by Emma Fried-Cassorla in Art Museum 2 Comments

Love Note #51: As Meredith Edlow says, “Relax, turn your mind off and float over to the Ben Franklin Parkway”

I am: A photographer, an artist, music lover and act as Visual Assets Manager for the Greater Philadelphia Tourism Marketing Corporation or GPTMC. We do VisitPhilly.com, Uwishunu, Philly 360°® and Philly Homegrown® . I have the pleasure of getting to photograph some great attractions and institutions in the city. Those institutions are in line with my personal interests which is a win win for me. Right now our organization has launched the With Art Philadelphia campaign that highlights the visual arts scene in Philly. I’m so proud that the city is taking the time to highlight a very important, very vibrant visual arts scene here.
Years in Philly: 13yrs.
Current Home: GHO/Graduate Hospital/Gray’s Ferry

My love note: Relax, turn your mind off and float over to the Ben Franklin Pkwy. Take some time looking at some of the great public art that is in the area and then duck into the Rodin Museum. Feast your eyes on some of the world’s best sculpture art. Take some time before you go inside and look at the “Gates of Hell.” This work of art brings together some pretty progressive ideas about human nature and is visually stunning. The Rodin Museum just underwent a year of renovations restoring everything to it’s original decor from 1929 which is an added bonus for visiting now. If you are an art lover then a visit to this site makes for a pretty awe-inspiring experience. I really love the music scene in Philly too and the Rodin Museum is now doing a series of outdoor concerts, creating a great well rounded experience while you immerse yourself in art on the Parkway. The Barnes Foundation is also steps away from the Rodin Museum and I really suggest checking that out if you have the time.

Posted on August 22, 2012 by Emma Fried-Cassorla in Center City Leave a comment